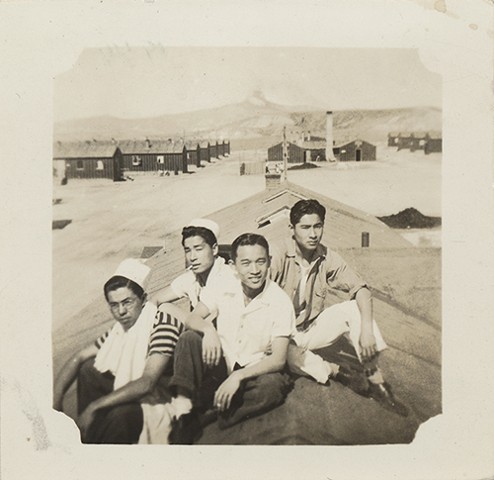 I use photography and artist’s books as my main media of expression. In my current artwork, I explore my Asian American and Japanese American heritage and identity. I create social commentaries that focus on the racialized identities, experiences, and histories of Asian Americans which have been silenced, marginalized, forgotten, and misrepresented within the mainstream American consciousness.

In recent projects, I have addressed the historical memories of the Japanese American incarceration, the “perpetual foreigner” stereotype, and anti-Asian violence in America. My intention in all of my work is to increase awareness of the issues and concerns that are important to Asian American communities. Nidoto Nai Yoni

Nidoto Nai Yoni consists of a series of black and white photographs that I took of the physical remnants of the ten American concentration camps that were used to incarcerate Japanese Americans during World War II. In 1942, approximately 110,000 Japanese Americans that lived within the western United States were forcibly removed from their homes, imprisoned in American concentration camps for up to four years, and denied their constitutional rights because of their Japanese ancestry. My mother, father, aunts, uncles, and grandparents were among those incarcerated.

These American concentration camps are important sites of memory, especially to those within the Japanese American community. My photographs of the remnants of these camps are suggestive of loss, uncertainty, and ambiguity. They are intended to serve as visual metaphors for the marginalization, erasure, and forgetting of the individual and social memories of the Japanese American incarceration experience that has taken place within United States history and contemporary American society, as a result of decades of silence, neglect, and denial. These photographs are also an expression of my concern with the loss of our understanding of this past that continues to occur as those who went through this experience pass away and their lived memories vanish.

As a third generation Japanese American, I feel a responsibility to engage with this history and help carry its memory forward into the future. This project is a record of my engagement through pilgrimage to these camp sites. My intention is for this body of work to inspire others to think critically about the importance of remembering the Japanese American incarceration, especially in regards to the lessons that can be learned from it and the real possibility that it could happen again to another group of Americans in the name of national security. Forever Foreign

In a series of posters titled, Forever Foreign, I focus on forms of racist expression known as racial microaggressions. Racial microaggressions are brief, everyday encounters (verbal or behavioral) that communicate disparaging racial slights or insults to people of color. Often times the person responsible for these subtle “putdowns” is well-intentioned in their actions, completely unaware of their own racial biases. This constitutes a form of colorblind racism, whereby race is still unconsciously exerting a strong influence on people’s thoughts and actions and through which racial inequality is unknowingly perpetuated.

The statements and questions I present are commonly heard by Asian Americans. While seemingly innocuous, these kinds of statements and questions communicate clear attitudes about how Asian Americans are seen and their position within American society. Through this work, my desire is to inspire dialogue about our everyday actions that unwittingly perpetuate racism. I am also concerned with promoting an understanding that these attitudes and actions are rooted in a particular reading of the Asian body (and all racialized bodies) that has a deep history, but is still very much present today. Back Stage

In the photographic series, Back Stage , I investigate the alleyways in my suburban Minneapolis neighborhood in order to draw attention to the ways in which peoples’ identities are expressed differently in spaces where it is assumed that little attention is being paid.

The inspiration for this body of work is derived from the sociological theory of Erving Goffman, who in his book, The Presentation of Self in Everday Life, addressed the nature of social interaction in people’s daily lives. In his theory, Goffman used the theatrical notions of the “front stage” and “back stage” as a metaphor for how people presented themselves socially. The front stage consists of situations where identity is performed publicly for others. The back stage involves a more informal, private, and relaxed expression of self. My intention in this body of work is to contemplate the differences between how people present themselves publicly and who they are privately. The Spaces In-Between

The Spaces In-Between includes photographs that I took of American college and university campuses. I photographed the interior architecture of campus buildings focusing on those “in-between” spaces, such as hallways, stairwells, common areas, and entrances and exits that connect and facilitate movement from one place to another instead of being destination points, such as classrooms, laboratories, and offices. In considering these spaces conceptually, I begin by viewing them collectively as a metaphor for the liminal experience of higher education, where those going through this process hold a transitional status and identity. I go on to explore the contradictions between the mission statements of colleges and universities and the spatial order of these institutions, which is often controlling, alienating, and otherwise depressing. My intention is to contemplate and draw attention to the indoctrinating influence and negative impact that these spaces have on students.